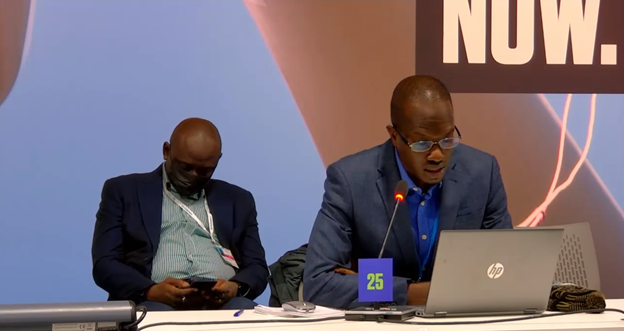 The role of the circular economy in boosting the ambition of national determined contributions (NDCs) was the topic of an official UNFCCC side event, held on Saturday 6th November.

The event was moderated by the Secretary for Climate Change of Argentina and featured contributions from several multilateral organizations such as UNEP, UNDP and the UNFCCC itself as well as a few countries committed to the circular transition such as the Netherlands, Finland, The Gambia and Argentina.

At the opening of the meeting, UNFCCC Director of Programmes, Daniele Violetti, recalled that in order to keep the average global temperature rise below 1.5°C it is essential to increase the ambition of nationally determined contributions and that the circular economy is a key resource for governments in this regard. Indeed, as the Ellen MacArthur Foundation and Circle Economy points out, countries are unlikely to meet the climate targets of the Paris Agreement if they do not integrate the circular economy into their national contributions. Moreover, the circular economy has an enormous potential, given that the global economy is currently only 8.6% circular.

Currently, national climate commitments focus almost exclusively on greenhouse gas emissions from the energy transition and do not sufficiently take into account emissions from the production of goods. These emissions could be significantly reduced through the circular economy.

During the meeting, the Gambia reported on its experience as a virtuous national example of circular economy integration in its NDC. Laos was also scheduled to speak at the side event, as another early adopter on integrating the circular economy into its NDC, but Laotian delegates were unable to attend in presence at Glasgow and due to connection problems were also unable to attend virtually.

Currently, too few countries effectively integrate the circular economy into their nationally determined contributions (NDCs). As a matter of fact, during the meeting, the urgency of moving from long-term goals and roadmaps to the adoption of effective policies to implement those very roadmaps was reiterated.

During the meeting, a number of recurring themes in the circular economy debate emerged, including the crucial importance of a systemic and co-creative approach and the role of multilateralism in addressing this circular economy. Without collaboration and inclusion of all stakeholders and right-holders in the conversation, according to the principle of leave no one behind, the global transition from a linear to a circular and regenerative production system will not be easily achievable. As both the Netherlands and Argentina emphasized, an inclusive and transparent dialogue is much needed to generate consensus on shared circular ambitions for the coming decades.

Moreover, circular economy training and capacity-building were pointed out as enablers to boost a much-needed systemic change of approach by all stakeholders: producers, consumers, governments and civil society.

Finally, during the side event, construction, the food system, plastics and e-waste were mentioned by the UNEP Executive Director Inger Andersen as priority sectors for the circular transition.

The circular economy plays a crucial role in raising national ambitions in national determined contributions (NDCs). We will find out with the next updates of national commitments whether this opportunity will be seized or not by global leaders.