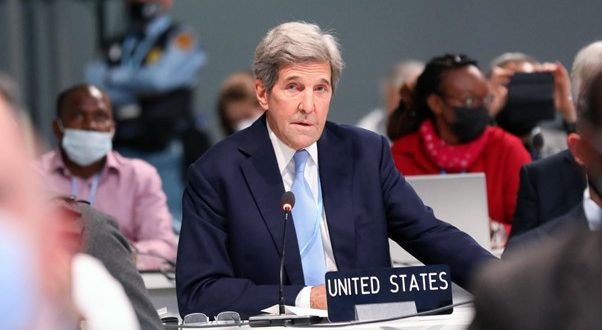 Yesterday’s informal plenary, Friday, November 12, served to give space to Parties to comment on the latest drafts of the texts.

Many countries have expressed their disappointment with the draft decision of the Conference (the one circulated yesterday), in particular on loss and damage and weakened language on fossil fuels: if in a first draft there was talk of hastening the abandonment of fossil fuel subsidies, later the field was narrowed to inefficient subsidies.

Norway, Costa Rica and Antigua and Barbuda on behalf of the Alliance of Small Island States (AOSIS) have spoken out in this regard. The latter stated, “We are not calling for the total abandonment of fossil fuels, but that at least all subsidies be stopped“. On Article 6, Antigua and Barbuda also spoke out against the transfer of pre-2020 emission units regulated by the Clean Development Mechanism (CDM) of the previous Kyoto Protocol. In order to increase the ambition of the new emissions trading mechanism, it said it was in favour of a partial cancellation of credits (i.e., in order to reach the target of its NDC, a country calculates only a certain percentage of the emissions eliminated thanks to a project it has financed, instead of the total, renouncing the remainder), which is, however, mandatory and not voluntary.

On the subject of loss and damage, the G77 Group and China said they were extremely disappointed by the absence of their proposals in the draft decision. In fact, the entire group represents over 80% of the world’s population, and therefore considers it absurd that its views are not reflected in the text. Despite some progress on the operationalisation of the Santiago Network, the group calls for greater solidarity from developed countries, and for the immediate implementation of a mechanism for loss and damage.

Developed countries have consistently opposed the idea of establishing a new funding mechanism specifically to pay back countries affected by the impacts of climate change. Among these, the United States: despite the ambition shown on many other issues and their revamped climate leadership, the US are still reluctant, as confirmed by the comments by John Kerry. The Special Climate Envoy stated that he was in favour of starting the Santiago Network, but that “the language has to be consistent with the Paris Agreement“. A statement that would seem to be standard when a Party is not willing to make further concessions on an issue, as demonstrated by Saudi Arabia in reiterating the importance of “not rewriting the Paris Agreement or altering its balance“.

Spurring on greater ambition, however, was the speech of Frans Timmermans, Vice-President of the European Commission, who urged those present to reflect on the world they will leave to their children and grandchildren. In addition to an abrupt move away from coal and fossil fuel subsidies, the European commissioner rebuked developed countries for so far failing to meet commitments on climate finance. He called the current deadline for disbursing funds, 2023, “disappointing” and urged that new funding streams be put in place, including private individuals. The EU is currently the largest provider of climate finance, having recently raised the amount to over €25 billion a year until 2027.

With the last few hours to go and fears that the final agreement is not up to snuff, other countries have taken the opportunity to make an appeal to the assembly. Kenya, on behalf of the African Group, recalled the incredible work done by young people at the pre-COP in Milan, who were able to produce a text in just three days. “Our children have passed the baton to us, but our greed threatens to ruin their future. This is our last chance“.

Equally harsh words came from Bangladesh, a spokesperson for the Climate Vulnerable Forum, which includes countries among the most affected by the effects of climate change, although they are not among the main culprits: “We are negotiating something that should not be negotiable. We are negotiating our future, our very existence. Why? Are we negotiating just to follow the formal UNFCCC process, or to actually decide on solutions?“.

Strong statements have also come from island states: Antigua and Barbuda, the Marshall Islands, the Maldives. But what really caught the attention was the intervention of Tuvalu, a Polynesian archipelago that is suffering the worst effects of climate change. The Tuvaluan Foreign Minister had already spoken from a podium knee-deep in water to remind people of the threat to all island States, an appeal that has gone viral around the world. Yesterday, the Climate Minister urged everyone in the plenary: “The Prime Minister and I agreed to come here to Glasgow, at the other end of the world, because we believed that during these conference decisions would finally be taken to combat climate change. And we were optimistic after the Leaders Summit, which showed commitment and ambition. But now we see that that optimism is not reflected in the decision text of the conference. Tuvalu is a group of atolls that are first to feel the effects of climate change. It’s an existential threat, not a future prediction, it’s happening now. Our country is disappearing. It’s sinking, literally. Action must be taken now. We propose stronger language on decarbonization and doubling climate funding for adaptation. We also call for easier ways to disburse. Currently, small island states find it difficult to access financial instruments. We are also calling for a specific funding mechanism for damage and loss: it is vital for us to get the support we need to save our islands and our identities before they disappear from the face of the Earth. I urge you to act now. Glasgow is a pivotal moment and we are counting on all of you, led by the leadership of the Presidency. It is a matter of survival for many of us. We implore you. Make this a pivotal moment and don’t let us down“.

Tuvalu’s heartfelt plea was met with a long, thunderous applause from the room.

With the last (perhaps) day of COP26 ahead of us and still no progress on climate finance, it remains to be seen if these appeals will be heard.