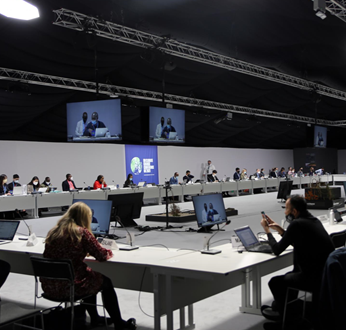 We are in the middle of the first week of COP26 and the issue of common time frames for Nationally Determineted Contributions (NDCs), one of the most relevant in this climate negotiation, has already been discussed in two informal sessions on Monday (1/11) and Wednesday (3/11).

Although the urgency of reaching an agreement has been repeatedly reiterated by the Parties, the issue was left without a shared conclusion in Madrid in 2019 and an agreement was not reached during the intermediate negotiations of June 2021, so at COP26 delegates begin their works with nine options still on the table.

This week’s informal sessions started from the informal note produced in June by the UNFCCC co-facilitators and from a second draft of the text prepared by the chair of the negotiating session, which collects all the nine proposals brought to the table by the Parties from 2017 to today.

These are the main issues discussed:

Among the options on the table we can find: every 5 years, every 10 years or a “5+5” years formula. This means that each country will be able to choose to present national objectives which, according to the option that will be chosen as definitive at COP26, may have a specific time and / or intermediate horizon, for example a commitment uploaded in 2025 could have 2030 as a horizon, 2035 or two intermediate steps, 2030 and 2035, in the same text. Each option leads to different monitoring timings and therefore to possible (and avoidable) tacticalities by less ambitious countries, which could propose ten-year commitments without then engaging in any specific action, for example, during the first eight.

For the moment, among the countries that support the most ambitious choice (the five-year option) we find the USA, the Least Developing Countries (LDCs), the African group (AGN) and the Environmental Integrity Group (EIG) headed by Switzerland.

China, Russia and Saudi Arabia, which in the intermediate negotiations were firm on the preference of the 10-year deadline, “open” to the possibility of including both the 5-year and the 10-year option, talking about Common Times FrameS (the s in the plural indicates more possibilities); this position is also supported by India.

The European Unione remains open to both the two main options at 5 and 10 years as already seen in the intermediate negotiations last summer.

As can be seen from the text, the points to be discussed in the 9 options on the table are still too many:

The definition of clear rules on the common time frames of the NDCs is key for Parties and observers to effectively monitor the commitment of countries in achieving their own climate goals. During the two negotiation sessions, the delegate of the Marshall Islands stressed the absence of various representatives of the countries of the Global South due to the logistical difficulties linked to the pandemic and therefore the need to allow these countries to speak even remotely; the delegate from Colombia recalled the importance of taking science and in particular the latest IPCC report into consideration when making a responsible decision in Glasgow.

Will a week and a half be enough to agree on one of the nine options on the table?