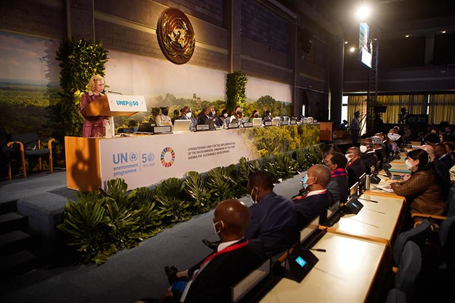 With the creation of the UNEA, efforts were also made to ensure greater involvement of civil society in decision-making processes within the working framework of UNEP, and to reform international governance for a more effective and efficient management of environmental policies. The Rio+20 Conference was fully implemented, conference where States committed themselves to strengthening the role of UNEP as the main environmental authority, with the aim of defining the global agenda for the environment and promoting its consistent implementation.

The fifth UNEA meeting took place in Nairobi from February 28 to March 4 against a dramatic backdrop. The response of the international community to Russia’s invasion of Ukraine was one of strengthened trust in multilateralism. The same was true for the UNEA, which demonstrated how international negotiations, despite their flaws, are a relevant mechanism for achieving concrete results. The resolutions approved are in fact an important step forward in addressing with a holistic approach current challenges, which are closely interlinked: climate change, biodiversity loss, pollution and threats to human health.

The news that has had the greatest resonance is certainly the historic agreement to end plastic pollution. The 175 Member States present have in fact adopted a resolution that lays the groundwork for negotiating a legally binding global treaty. In detail, the resolution establishes an intergovernmental negotiating committee that will begin work this year, with the goal of finalizing an agreement by 2024.

Considering that 99% of plastics are of fossil origin and are responsible for 5% of current global emissions, with disastrous impacts on ecosystems and human health, and that without a reversal its production is set to double before 2035, it’s not surprising that UNEP’s executive director called it “the most important multilateral environmental agreement since the Paris Agreement.”

An important note is that the text will cover the entire lifecycle of plastics, from production to design to disposal, and will push for greater technical cooperation and capacity building among countries: further confirmation of the need to create effective multilateral solutions to combat complex phenomena that transcend geographical boundaries.

However, this is only the first step, albeit a crucial one, of a long negotiation process that will have very important repercussions also in the field of human rights. The final text will only be truly effective if it provides transparent monitoring and reporting mechanisms, as well as adequate funding instruments, a key point to ensure that no false solutions are adopted to the impacts of plastic pollution on ecosystems and people. But the benefits of proper implementation would be manifold. As stated by Inger Andersen, Executive Director of UNEP, rethinking the plastics cycle from a circular economy perspective would allow, by 2040: to reduce the volume of plastic waste in the oceans by more than 80% and the production of plastics from virgin materials by 55%; to save US$70 billion; to reduce greenhouse gas emissions by 25%; to create 700,000 jobs, primarily in the Global South.

Another key point of the resolution, which civil society has been fighting for, is the need to integrate the traditional knowledge of indigenous and local people into policies. They, in addition to being able to make a huge contribution through their expertise in circular economy solutions, are among the communities most affected by the consequences of environmental degradation caused by plastic pollution, from extraction and production to disposal.

In another unprecedented achievement of this UNEA session, countries finally agreed on a formal definition of nature-based solutions. The approved text defines them as “actions to protect, sustainably manage and restore natural or altered ecosystems, (actions) that respond to societal concerns in an effective and adaptive manner, while ensuring human well-being, ecosystem resilience and biodiversity benefits.” In addition, the resolution recognizes their key role in responding to climate change and calls on UNEP to support their implementation.

Nature-based solutions are able to reconcile human well-being with the restoration of biodiversity and ecosystem functioning, and therefore their inclusion in international agreements has long been promoted by civil society. But this is the first time the concept has been discussed and agreed upon at a multilateral conference. We got almost there during the recent COP26, where the role of nature in achieving the goals of the Paris Agreement was recognized, but the reference to nature-based solutions was later removed from the final text. The UNEA decision is therefore a big step forward, and also gives hope that these solutions will be included in the post-2020 Global Biodiversity Framework. This is a plan that will set targets to preserve and protect nature and the benefits derived from it, with the goal of halting biodiversity loss by 2030 and restoring it by 2050. The final text will be discussed at COP15 on biodiversity in Kunming, China (April 25-May 8, 2022).

This text also states that policies should be developed integrating the perspectives of indigenous and local populations. Their prior informed consent is indeed required if actions taken are likely to affect them. To date, multilateral agreements do not have sufficient guarantees on the protection of human rights, and this still puts many people at risk of dispossession. It will therefore be crucial, during implementation, to recognize and protect land rights, since very often nature-based solutions affect indigenous peoples’ territories without any regard for the rights of their residents.

In addition, the resolution calls on UNEP to prepare a report on the issue in close collaboration with FAO, WHO, the World Organisation for Animal Health (OIE) and the One Health High-Level Expert Panel (OHHLEP). To date, animal welfare has been largely neglected in international decision-making processes. Although the UN’s 2030 Agenda for Sustainable Development calls for “a world in which humankind lives in harmony with nature and in which wildlife and other living species are protected”, the goals of the Agenda are mostly aimed at species, biodiversity, and habitat conservation, with no reference to the welfare of individual animals, wild or domestic. Besides the moral imperative to protect other living species, there is another reason why this gap needs to be filled: the COVID-19 pandemic has abruptly reminded us how interconnected human health and the health of other species are. Habitat destruction, industrial-scale breeding, and wildlife trade all contribute to zoonotic diseases, which could become even more dangerous with the global average temperature rise caused by climate change, easing the emergence and spread of these pathogens. This unprecedented decision is also a victory of the civil society, the result of a decade-long collective effort through awareness campaigns and relentless advocacy work by non-governmental organizations.

AN IMPORTANT GOAL, BUT THERE IS STILL A LONG WAY TO GO

By their very nature, international negotiation processes progress slowly, involving almost every country in the world, with often conflicting points of view. Nonetheless, this UNEA session demonstrated that important decisions do also emerge from the negotiating rooms and that the work of civil society can have an impact in influencing international policy and governance. In addition to the historic agreement on plastics, the texts approved are generally a step in the right direction for the environment, climate and human rights. In particular, because they recognize the link between safeguarding the environment, human health and other species. Moreover, they refer to the interests of indigenous peoples and local communities.

As confirmed by the latest IPCC report, the impacts of climate change mainly affect marginalized and vulnerable groups, exacerbating already existing inequalities. However, the same risk is also run when environmental policies fail to take into account the potential negative consequences for all affected groups. It will be crucial to translate UNEA’s decisions into truly inclusive national policies, involving all stakeholders in their design and implementation. Thus, the absence of effective implementation measures still weighs heavily.